I started using HabitRPG last weekend. At first it was just fun, but after one week I’m actually seeing some positive effects already:

I find that the following elements of gamification work the best on me:

Sounds interesting? Check out the tutorial to see how it works. This is a screenshot from my page just to give you an idea: 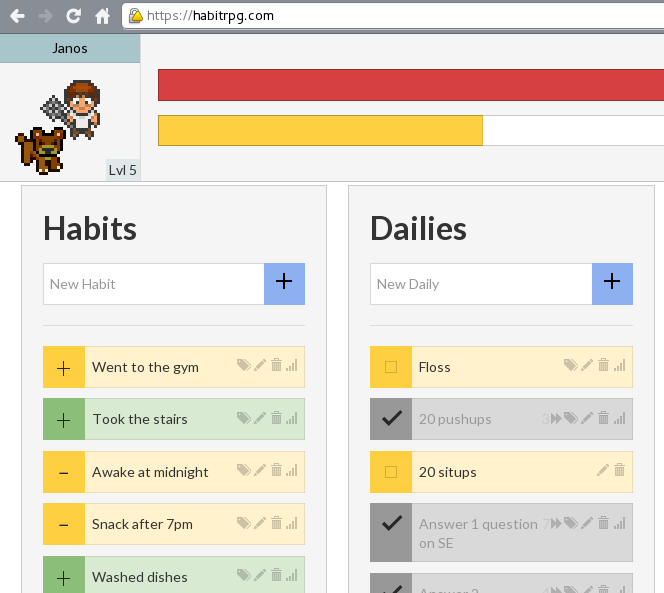 A surprising effect of the dailies was that now I spend much less time on answering questions on Stack Overflow compared to before. Recently it’s been kind of an addiction/obsession for me to collect reputation points on stackoverflow.com. I was aware that I was spending more time than I should, but it was hard to resist. There, a simple daily task on HabitRPG seems to have cured that addiction. The task says: “Answer 1 question on Stack Overflow”. As a result, after I already answered one question on a given day, I have no more incentive to do more. In fact that would risk missing my other dailies.

In other words, if you think you are doing X too much, add a daily that says: “Do X for 1 hour”. After you’ve done that a day, you will get no extra benefit from it. The incentive to do more will be taken away. At least in terms of HabitRPG.

Sure, this might not work for everyone. In any case here are some extra tips for beginners:

Oh and by the way it’s open-source, here’s the main repository: